We all have worries about our children, but as a rule many people assume their children’s eyesight is fine.
When I told people KW3 needed glasses, no one could believe it and many still can’t. She looks at people, smiles, follows our pets around, grabs things that interests her, is very content and her eyes seem straight! This however, is a common misconception. Just because you think they are fine, it doesn’t mean they are!

In America all parents are encouraged to get their babies checked sometime after 6 months as problems being caught early can prevent much more serious eye problems later. Granted, they have to pay for this privilege but it is encouraged nonetheless. In the UK we have even stopped the eye screening at the two and a half year check, which I believe is madness and all to cut budgets! Leaving testing them until school is such a shame and leaves so many parents feeling unneccesarily guilty that they had no idea their child’s vision was so bad. Large chains often don’t test until children are three, but some specialist opticians/optometrists are more than happy to test children that don’t talk and they have simple non invasive ways of checking whether their eyesight is a concern.
For KW3, the ‘test’ consisted of looking into little torches, tracking objects, and having different lenses held in front of her eyes while looking at bright flashing objects,  this told the optometrist that her vision was a concern so would need further investigation. KW3 actually enjoyed the test and it cost us nothing, the next test will be slightly more gruelling as she will have to have the drops to dilate the pupils, but that is only done if there seems to be a problem.
We honestly thought we would be leaving the optometrist with a clean bill of eye health, not a referral, but it just goes to show you can never be to sure.
I would encourage everyone to get their little ones tested, whether family history or not, but even more so if family history. What harm can it do, it doesn’t cost a penny and it could make a massive difference to your child’s sight . After all, I hadn’t a clue that my darling babies were very farsighted! 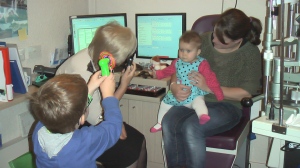 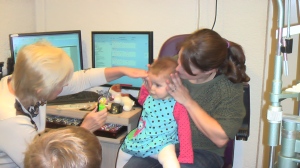 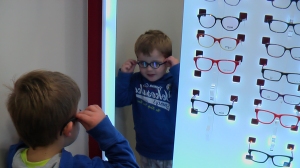 26 thoughts on “Why bother giving my baby an eye test? They seem fine…”