Why is the reality of baking with children so different from the reality? Baking in our house always ends the same way- in a mess, and often with arguments about stirring, pouring, weighing or even what to bake.
Today, I decided as it was rainy we would do some baking while KW3 had a nap. After much debate over what to bake, we settled on chocolate molten cakes (eldest KWs choice) and tropical pineapple cupcakes (KW2’s choice).
Even just pouring the flour from the scales to the bowl, results in spillage and consequently means the ratios are not as exact as I would like for cakes.
KW2 constantly asks “can I lick the butter, flour, mixture etc”, eldest wants to do everything but had not mastered holding the bowl when stirring, and constantly needs reminding. Both of them getting upset if they perceive the other has poured more in, stirred for longer.
Anyhow, it ended up with me doing the majority and the KWs making token stirs, weighing etc. They were desperate to put the mixture into the cases, but the mess that this causes ( and wastage) perturbs me and it wasn’t long before I took over. Is this how baking goes with other families? I have no idea, but it is from from idyllic in our household. The kids have a ball though! 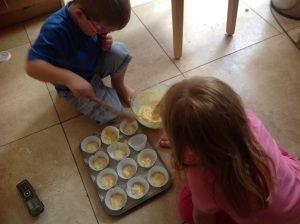 They particularly enjoy the eating… Licking the bowl and utensils is a must. The challenge is getting them not to steal a sneaky lick during the baking!